Post-herpetic neuralgia is pain that lasts for more than a month after a shingles infection occurred. The pain may last for months or years. It affects the fibers in nerves, which can cause a burning pain that lasts for quite some time after blisters and rashes disappear. It is more common in people over the age of 60, and while there is no cure, there are certain treatments to ease the symptoms.

Usually, people who suffer from post-herpetic neuralgia have symptoms in the area that they had the outbreak. It is just as common for people who had shingles on the face, as it is anywhere else on the body. Main symptoms can include:

As we get older, our immune system doesn’t work as well as it used to. If you have had chickenpox, the virus remains latent in your body for the rest of your life. Chickenpox can reactivate in the form of shingles due to anything, including medications or chemotherapy.

During a shingles outbreak, fibers in the nerves are damaged and post-herpetic pain can happen after the shingles have disappeared. Because fibers that are damaged, they can’t properly send signals from the skin to the brain as they normally do, and the signals become confused which leads to sometimes unbearable pain. This pain can last months after the outbreak and sometimes even years after. 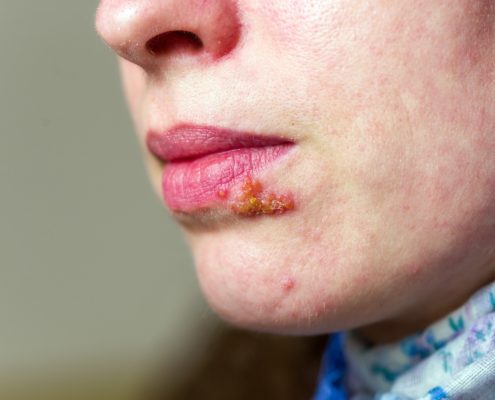 Post-herpetic neuralgia is most common in women and men over the age of 50 who had a severe rash. It can also be caused be a result of having a chronic disease such as diabetes.

Diagnosis and Treatment of Post-Herpetic Pain

This type of pain can be completely debilitating, and it is important to jot down your symptoms, when they started, and how long they have been going on. All of this information will help your doctor diagnose you and help you with a treatment plan. Also, make sure you have your full medical history and list any vitamins/medications you take including doses. Sometimes certain medications can cause symptoms to worsen. Make sure you tell your doctor what makes symptoms better and what makes it worse.

Your doctor will want to examine your skin, which is the first step in receiving a proper diagnosis. Tests aren’t usually necessary in most cases.

Some people have very severe cases that need opioid painkillers or steroid injections to ease the pain. Others might only have mild discomfort and only need an over-the-counter anti-inflammatory.

What Our Patients are Saying

Dr. Muhammad was professional, knowledgeable and seemed to genuinely care about finding a solution to my pain problem.

Dr. Rasheed has been a wonderful doctor so far. He’s very professional and confident. He has had a ton if ideas for us to try, which is completely different from my last pain mgt. doc. So far, he’s been everything I could have asked in a pain mgt. doctor.

I love Dr. Abdelfattah! He is an amazing doctor. He has an excellent beside manner, and her Is very interested and concerned about his patients, and their diagnosis, and he is able to empathize with his patients. He is very skilled at preforming minimally invasive procedures that can really reduce pain. He is NOT a pill mill, but he is NOT scared to prescribe what the patient may need to be comfortable and to reduce pain. As far as I can tell the Pain Management Clinic is in full compliance with the State medical board’s guidelines on Pain Management Clinics. I would send anyone who is seeking relief from their pain to him because he is going to do his very best to find out what is causing the pain, and the best way to treat it. Truly an AWESOME doctor!!! I nominate him as a TOP DOCTOR!!! Being a healthcare professional I know a good physician when I see one and this one is it!!!!

Staff was amazing, tell you what they think and give you options and really wants to know the underlined cause before they do anything. I think that’s awesome and will recommend to anyone!!!

Everyone was so nice. Dr. Zhao explained things to me in a way I could understand everything. She had a smile on her face the whole time. It was like she was happy to see me. I really liked how the appointment turned out.

Dr. Syed listens to me & gives me hope for conquering this constant pain of neuropathy. He is open to new methods of treating my constant pain.

Super place, super doctors. Took the time to explain everything to me.